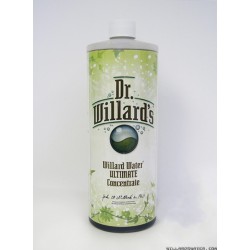 We are an Authorized Willard Water™ Distributor. The Real Willard Water is actually an additive for your drinking water. It’s a patented process that’s been independently tested and analyzed by several independent and reputable laboratories and by the FDA as safe.
Over the years it’s been so useful and helpful to thousands of people that many consider it a general tonic. They swear by and can tell a big difference in their health and well-being when they stop using it. Yet it is not a tonic. It’s a solution that alters the structure of water.
Some people in the scientific and medical community have attacked it as “snake oil”. But the U.S. Patent Office does not issue patents unless a product really does what its inventor claims. Remember, IF there were NO real benefits, it couldn’t have received a U.S. Patent, much less 21 U.S. Patents!
What exactly is in Willard Water?
Willard Water contains a very dilute solution containing:
• Lignite
• Sulfated castor oil
• Calcium chloride
• Magnesium sulfate
• Sodium metasilicate
• Catalyst Altered Water (CAW) Micelle — that’s the patented ingredient
In short, The Real Willard Water makes water wetter.
Why would I want my water wetter?
That’s a fair question. We all know water is wet. The CAW process alters water so it is:
• More reactive or receptive as a carrier to eliminate toxins
• More efficient at absorbing nutrition so your body can repair itself naturally
• Better able to transport nutrients to assure your continued health
• Shown to be totally safe and effective
That’s why after adding Willard Water to regular water, it doesn’t behave the same, says Dr. John W.Willard, Senior–its inventor.

How can The Real Willard Water specifically help me?
Here are some of the reported benefits of using The Real Willard Water in your drinking water.
• Increased absorption of nutrients to enhance your energy level and your body’s ability to repair
• Increased elimination of toxins and wastes preventing an overwhelming build-up of disease-causing materials
• More ability to act as an extraordinary scavenger of free radicals to help preserve your youth
• Higher antioxidant properties to help stave off serious disease
• More definite reduction of swelling and pain, headaches, arthritis and much more
• Higher degree of alkalinity to improve your digestion
• Improved skin conditions and better weight loss
Those properties explain many of the benefits reported over the years. After all, most people now recognize, if you improve nutritional absorption and elimination of toxins, you’ll see some health benefits.
Additionally, some experts say 80% to 90% of all adverse health conditions are caused by free radicals.
The Real Willard Water has been found to be an exceptional scavenger of them (because of its nearly endless supply of electrons that it “gives up” to create better health balance). And anyone in pain knows that reducing swelling can be a big positive benefit.
How can I be sure it’s safe?
Many independent and reputable laboratories along with the FDA have tested and analyzed Willard Water. It has always been shown to be:
• Non-toxic
• Non-corrosive
• Non-mutagenic
• Non-carcinogenic
Today The Real Willard Water is still produced by Dr. Willard’s family in South Dakota. It is the ORIGINAL and ONLY PATENTED Catalyst Altered Water.
They use state of the art mixing, filling and processing, FDA approved facilities.
Consistency, purity, and cleanliness are a top priority and always maintained throughout the production process.

How do I use The Real Willard Water?
Directions for use of Willard Water are are included with each order. It is sold in a concentrated liquid form and must be diluted with good, pure water. Please review directions before using.
Willard Water’s proper effectiveness is created when one ounce concentrate is diluted with one gallon of good, purified water. It is recommended that you use spring or filtered water. Never use tap water!
DIRECTIONS: Put one ounce of Willard Water in a gallon of water. Of course, you can always use less. Just see what feels right for your body. You can then use the water for drinking or cooking.
1 liquid ounce=Two Tablespoons
FOR EXTERNAL USE: Spray for external use for faster healing of cuts, scrapes and burns. Also supports healing, improves skin problems like acne, psoriasis and eczema.

What are some other reports of benefits using Willard Water in daily use?
• Cold hands and feet aren’t cold anymore. (Better circulation?)
• Sleeping better and often seemingly dreaming more (or remembering dreams better)—a sign of better sleep.
• Improved regularity (ending chronic constipation for many people, and ending chronic diarrhea in others).
• Better absorption of foods — kernels of corn no longer visible in their stools.
• More alert, better memory, a feeling of being “more alive” or a “general feeling of wellness”.
• Fewer aches & pains.
• More energy.
• Better condition of hair & nails.
• Better complexion and “color”.
• Dealing with stress better (indicated by less “nervous eating”; fewer sleep problems, etc.)
• Fewer colds, flu, and other such problems—and getting over them quicker.
• Quicker-than-usual recovery from surgeries & healing of broken bones.
• If they quit drinking Willard Water, eventually they say they realize they’re feeling again like they did “before the water”, and then realize it really was helping them.
• Finding that nutritional supplements seem to be working better—often getting the same results, taking less of the supplements.
• Also finding that many other personal care items also work better, when using The Real Willard Water with them — from shampoos, conditioners, and skin moisturizers to toothpaste!

Why is it called “The Real” Willard Water?
Like many other good things on the market, there are always “knock offs” or imitations. It seems there are many generic replications of Willard Water.
But the only one sold by Doc Willard’s family is called The Real Willard Water. It’s the only one patented, made and bottled right at the Willard manufacturing plant in Fargo, North Dakota.
In the case of Willard Water, it comes down to this: buy what is made and BOTTLED at the Willard manufacturing plant, leaving no possibility for improper dilution, mixing, or bottling of it by anyone not experienced in handling this unique, patented product.
At Alternative Choices Healing Center, we GUARANTEE that’s what you’re getting–the real thing, in its full concentration, just as Dr. Willard made it, and patented it, and as 60 Minutes found it and investigated it!